Cappadocia Hot-Air Balloon – 5 Tips for the Best Photos and Experience. 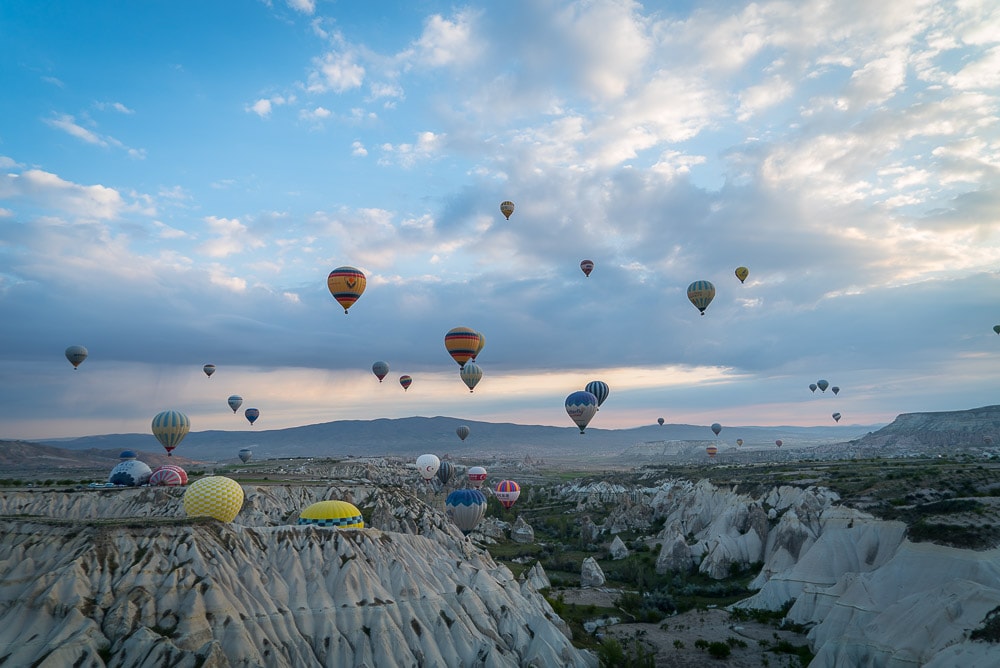 A few years ago a friend of mine was talking about his backpacking trip through Turkey. “You’ve got to hit Cappadocia bud, it’s got mad landscape, unlike anything else I’ve seen before”.
Google Image Search.
Oh, my word. The images returned on the page were breathtaking. From amazing cave like dwellings in the side of mountains to extraordinary stone structures that had eroded into cylindrical points and some incredibly colourful images of hundreds of colourful hot-air balloons floating above this incredible landscape. I had to see this place for myself and I added the destination to my bucket-list.

It still blows my mind sometimes how many things I add to my bucket-list and then, almost magically, they get ticked off almost without me doing anything else about it. When, as a result of visa complications, I was unable to meet my friends in Italy, I decided to come to Turkey instead. My parents and other people that have travelled to Turkey have always raved about the country and people had told me that Istanbul was a great city to spend some time in. I was also able to come to Turkey without having to get Schengen visa, which had been the reason I cancelled my Italy trip. Turkey issues South Africans a 30 visa for free on arrival.

So, after three weeks of being in Istanbul, I booked a plane ticket and headed to Cappadocia to see this amazing place. My main objective was to take a balloon flight and to try and recreate some of the amazing photographs that I’d seen when I’d done the Google Image Search all those years ago. Bookings of both accommodation and balloon trips prior to arriving weren’t easy as I realised that in planning to be in Cappadocia for my birthday it coincided with the Turkish public holiday, National Sovereignty and Children’s Day. When I had managed to get hold of the manager of one of the guest house options that I was going to book I’d asked him about a balloon trip. He told me that he would be able to organise it and book it on my behalf and that the balloon company would be able to collect me from the hotel. Perfect. He’d also asked if I’d wanted to go on the “first (sunrise)” or “second” flight. “Sunrise for sure”, I’d replied. He also asked if I’d like to go in a sixteen person basket (EUR150) or an eight-person basket (EUR 180). I’d opted for the second option thinking that it would be more comfortable and less crowded.  It turns out that some of the choices that I made weren’t optimal for my main objective for the trip.

Here are my five top tips for making the most out of a trip to Cappadocia and getting the best photographs on your balloon flight.

Despite the inconvenient nature of it being a Turkish public holiday and the mass of local tourists in Cappadocia, it turned out that choosing the 23rd of April worked in my favour. There are 24 balloon tour operators in Cappadocia, and due to legislation, no more can be incorporated. The local aviation authority allows a maximum of 150 balloons to fly each day, and this allocation is already spread across these 24 operators. The best photographs I’d seem were the ones with what seemed to be hundreds of colourful balloons in the photo. The number of balloons that fly though, is determined by demand. So, in low season there are going to be fewer balloons over the landscape. Based on weather conditions and seasons, the weekend that I had chosen is one of the busiest. So before booking make sure that it’s a busy time to ensure a sky full of colour.

2. Choose the best town to stay in.

While I didn’t stay in any of the other towns that make up the Cappadocia region, Göreme is the main tourist area. Most of the balloon company’s offices are located here as well as many hotels, guesthouses and restaurants. One of the novel ways to stay in Cappadocia is in one of the cave hotels that are built into the rocks. Being high season meant that the only cave hotels available were out of my budget. I booked and was happy with the simple accommodation at Cappadokiss Hotel. There are many great restaurants in town but one of the best, and where I enjoyed a great dinner on the evening of my birthday was Topdeck Cave Restaurant, which is built in the cave style. The tapas style food is a great way to eat and I’d recommend this eatery that’s owned by a Turkish – South African couple.

Views over Göreme at night

3. Give yourself a few days

Each morning before the sun comes up, the local aviation authority sends tiny weather balloons up into the sky with monitoring equipment to test among other things, wind speed and direction. A hot-air balloon can control only its altitude by adding or letting hot air out of the balloon. The direction that it flies and where it eventually lands is dependant on the wind (speed and direction). When wind speed is too high it makes conditions too dangerous to fly and on these days, the man with “Cappadocia Aviation Big Cheese” on his business cards determines the fate of 150 balloon pilots and their passengers. If you’re in Cappadocia for a single day and the weather is not conducive to fly, you’re going to go home with an upsidedown smile and your camera’s memory card with loads of empty space. I had heard about and had given myself three days in Cappadocia. It turns out that this worked out for me for a number of reasons. On the morning of the 22 April I’d got up at 4:15 am and at 4:30 am had been collected from my hotel by the company that I’d booked the 8-person sunrise flight with. After driving around the small village of Göreme for almost 45 minutes to different hotels fetching other guests, we arrived at a central meeting point. The meeting point was a large restaurant type establishment set up with large tables packed full of tourists from all over the world, taking selfies and eating toast, olives and tomatoes, a standard Turkish breakfast. AAs the time passed and looking through the glass sliding doors of the meeting point the sun was starting to come over the mountains in the distance and I started to feel anxious about the fact that we were going to miss the best photo opportunities. A few minutes later one of the organisers that had been walking around with a clipboard and talking on the phone announced that the authorities had cancelled all balloon flights for that day due to wind conditions.

As we piled back into the 12-seater minibus and headed back to Göreme, I felt a deep sense of sadness for the young Indian doctor I had spoken to while we waited to hear about our balloon flight. He and his wife had travelled to Turkey from New York and were flying back to Istanbul and then onto the States later that evening. There would be no balloon flight for them.  Disappointed, I arrived back at the Cappadokiss Hotel and waited until breakfast which was served from 9 am.

The owner of the hotel sat down at the table which I was alone at, eating my breakfast and reading a book. “Good morning”, he said warmly.
“Merhaba brother”, I replied using one of the three Turkish words that I know.
“No balloon flights today.”
“I know I was booked to fly this morning”, I said.
We got chatting and Mushin told me that he was also a balloon pilot. I told him that I had come to Cappadocia especially for the balloon trip and was keen to get some good photographs and video footage. Mushin was born in Cappadocia and had lived here all of his life. He and I had a great connection immediately and he started to explain the balloon industry to me. He told me about the best times to fly and explained the differences in basket sizes.

As it turns out, the sunrise that I’d initially booked, is not the best time to fly. At 6 am the first (sunrise) flight takes off and then about 25 minutes later the second flight goes up. Being on the first flight means that almost half of the balloons (from the second flight) are not going to be up yet. For the best photographs, Mushin explained, you want to be on the second flight with all the other balloons already up and in the air in front of you.

Mushin went on to explain that balloon companies often paint the picture of smaller baskets as a less crowded and a more intimate experience and then charge you a higher price for the ‘privilege’. Pretty much how I’d booked my flight. He said that once you’re in the balloon’s basket each person is standing facing out and it makes no difference if you’re with eight people, twelve or sixteen. He also explained that flying a larger basket was safer. The larger basket meant it needed a larger balloon, and this means that the balloon was more stable in the air. He explained that smaller balloons are less able to stay at a consistent altitude, and they’re always either ascending or descending. Mushin then explained that like aeroplanes, the larger the set up the more experienced the pilot needs to be to fly. So larger balloons with more passenger require a more experienced pilot and are safer. I decided against going down the road of finding out why the smaller, less stable and more dangerous balloons were the best to “learn” on as an inexperienced pilot. ?

As we’d not been able to fly earlier that morning, I’d been able to cancel my initial booking, and booked instead with Mushin and the team at Turkiye Balloons for the following morning. On the morning of the 23rd April (on my birthday) myself and ten other guests under the calm and steady hands of Mushin as our pilot we had the most incredible hot-air balloon experiences we could have hoped for. The weather was calm and still, it was much warmer than it had been the previous day and being on the second flight on this busy weekend meant that the sky was a mass of colour with all 150 balloons flying.